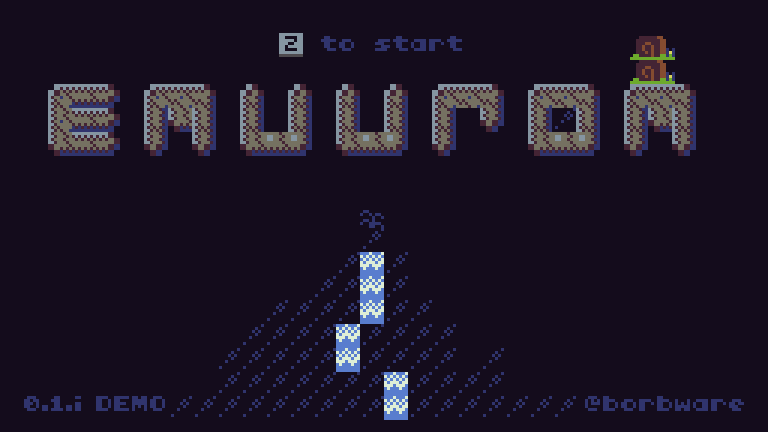 EMUUROM is a game, currently just a demo, made for the TIC-80 fantasy console. I'm familiar enough with the idea of a fantasy console - the PICO-8 is available in the bundle and I've played games made for it before - but I didn't realize there was more than one of them. I really like the idea of these micro-consoles, creativity through limitations and all that, and if I had the inclination or ability to make a game I would probably try with one of them. 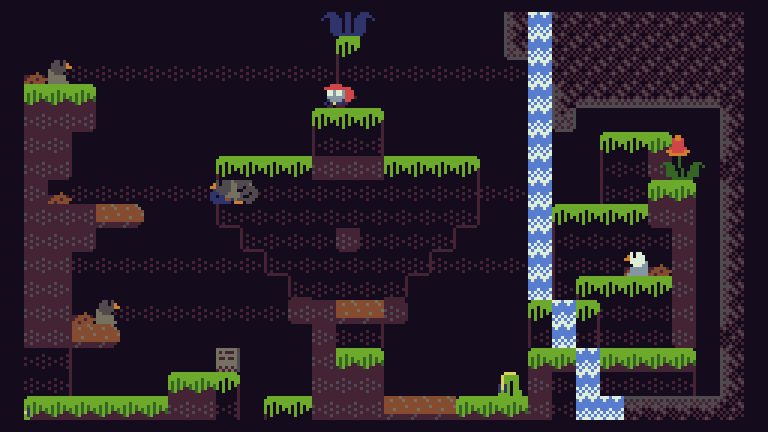 EMUUROM is a non-violent game, which is refreshing, and revolves around scanning plants and critters to document them. Most of these creatures are also used for exploration or puzzle solving: bouncing off, pushing around, or hitching a ride on the wildlife. It's a very relaxing, birdwatching-esque vibe at times, hanging around the local ecosystem and playing with them a bit. There's no major punishments that I could see, with the worst fate to befall me having to be climbing back up from a missed jump.

The chillness of the game concept itself is a bit of a contrast to what looks like a game planning to follow the "no helping" philosophy. EMUUROM does not want to hold your hand nor offer much in the way of guidance. The start of the game is a bit confusing as you don't actually have the scanner yet: there's several screens of exploration and platforming to find it in the first place. That's a bit of an odd decision when the scanning is such a big part of the game, and indeed you can't read the informative slabs you'll find along the way until you get it... leading to backtracking for tips you either already know now, or would have been nice to know beforehand. 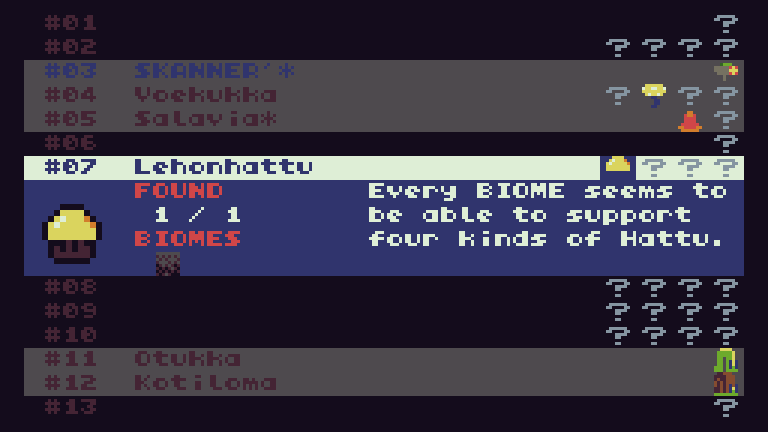 Some of the platforming was a bit tight, and more than once I just wish I had a double-jump upgrade or something... is there one? Did I miss it? It's hard to be sure in games like this if I saw everything or not. Either way, there was a distinct lack of upgrading after getting the scanner, which for a game tagged as metroidvania felt surprising. This definitely seems like the sort of game where you'd find a few extra movement options to help you out, but most of the "metroidvania" I noticed was the collecting, and moving snails to make shortcuts. There were puzzle elements, like realizing the scanner's rays themselves could influence things, but I wouldn't exactly call it a puzzle game either.

Mild genre confusion aside, scanning creatures is very satisfying, and the game helpfully marked scanned creatures when you take out the scanner. There's a fun little database documenting all the wildlife you've found and a map (that I honestly found dubiously helpful). It's also not just enough to scan a creature, as it keeps track of your progress towards scanning every of that creature - a much more ambitious task. In the relatively small area the demo offers, there was a lot to scan and a lot of spots to wonder how to reach. If what I saw's indicative of the rest of the game, then I am more than excited to see EMUUROM's completion.

I enjoyed it. EMUUROM is a good game... demo, for a game.

Check out EMUUROM on itch.io
Previous Page
Back to Index
Next Page