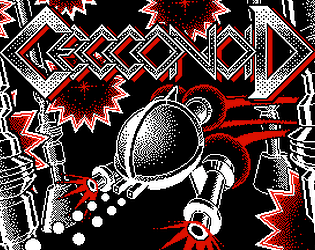 This game contains flashing images that could potentially trigger seizures for people with photosensitive epilepsy. Like, seriously, the entire game flashes, ALL THE TIME, and there's no option to change it.

This is already an immediate deal-breaker for me, but I went ahead and gave Cecconoid the benefit of the doubt and gave it a shot. It turns out the screen flashes are only the secondary problem of my eye strain.

It's the CRT effect. It is very, very well done, and almost to the point of a fault. I don't think the black and white only colors are helping it here, but the bloom, slight blurriness, and striping really, really hurt my eyes to look at. Just like the epilepsy flashing screens, there doesn't seem to be a way to turn these off, either.

From what little I played of it before deciding I just can't take it anymore, it seemed just okay. A bit slow, but that's probably just at the start. I got a neat powerup which I lost when I died, and by all understanding I couldn't get it back so I was stuck very slowly plinking away at enemies. But, again, it's hard to want to play something when it hurts to look at it, so.

I can't really say if Cecconoid is a good game or not due to my limited ability to play it.

Check out Cecconoid on itch.io
Previous Page
Back to Index