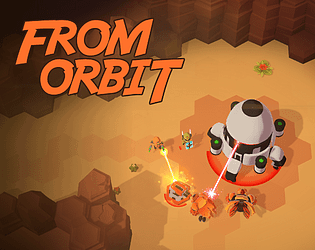 From Orbit is a real-time strategy game, which is bad news because I'm pretty bad at any video game that doesn't give me infinite time to think on top of exploitable "I Win" buttons.

There's not a lot of games I'm good at.

Starting with two units - which make adorable "adults from Peanuts" kind of warbling distortions as they move and act - you must explore the planet, gather ore and crystals, and defend your spaceship from a constant stream of angry native life. At any time, you can change a unit into any of four roles: combat, healing, building, and gathering. After you decide you're ready to leave and depart, you can spend your resources on upgrades and choose the next planet to visit. Rinse and repeat until you make your way back home.

I had a very good time with the basic gameplay loop. Roaming around and finding a resource node is satisfying, and enemies gradually increase in intensity the longer you're on a planet. Landing was a quick scramble to get a turret or two set up, so I could begin gathering in relative safety. With how the planets are randomly generated (and some have special effects like toxic air or just being more hostile), sometimes a world just didn't want to get along, and I had to bail early. Not knowing when to cut and run, or thinking my ship could handle more combat than it really could, costed me dearly.

From Orbit unfortunately feels like it's missing several rounds of polish. The UI is labeled with their keys, but no way to rebind that I saw. The game also doesn't tell you much about how it works, for better or for worse, leading to a few false starts before I caught on to how I was probably "supposed" to play (the harvesting machine feels like a bit of a trap - it was usually better just to switch to Harvester and gather manually). Some mild clumsiness with units having trouble getting to places, and thoroughly uninteresting upgrades of mostly the +% to value kind, all pile on the reminders that this isn't a AAA product I'm playing.

Also, ice planets are completely wretched. Just the worst enemies to have to fight. Keep me in the deserts shooting beetles any day.

Now, granted, I don't know much about RTS games or their friends, so I'm sure I'm performing a mix of ignoring larger problems and enjoying it for sheer novelty, but I still had a very good time with From Orbit in sprite of my observations. Having only one "try" per run felt pretty roguelike, and the challenge curve felt about right for ramping up into the later planet onslaughts. It's a bit hard to recommend at the $10 price tag I'd say, but bundle owners who already have it can feel comfortable checking it out. And who doesn't like gathering stuff to upgrade stuff to gather more stuff and so forth?

I enjoyed it. From Orbit is a good game.

Check out From Orbit on itch.io
Previous Page
Back to Index
Next Page