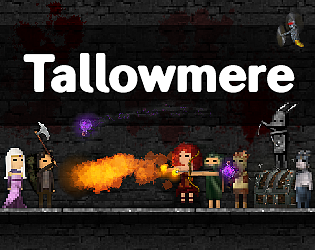 I kept putting this off for a while because I kept trying, but despite my best efforts, I couldn't bring myself to enjoy Tallowmere. Or maybe I'm just demotivated in general. Hard to say, but I still had a hard, hard time with Tallowmere, so let's burp out a couple paragraphs real quick.

Which is a shame, since it's a concept that I think could have been very up my alley. Procedurally generated side-scrolling adventures. It's been done, it's worked before in games like Rogue Legacy. So what went wrong?

The procedural generation didn't feel great. The layouts of rooms were somewhat incoherent, with traps and enemies thrown about and mashed together in ways that often felt like gotchas. It's very telling when the game offers unlimited jumps - I take that as a sign in no confidence they can consistently produce otherwise winnable maps.

Right out the gate, I ran into some very grating enemies. Projectile throwers that stun you if they hit, some kind of flying insect that does a latch-and-drag on you for huge damage. They're tough enemies, and the sort of toughness that works best in carefully designed levels, or at least more robust procedural generation, instead of jumping around infinitely trying to reach and smack things.

Dealing with any of this could have been all right, if the combat in Tallowmere wasn't what it was. Slightly confusing control scheme aside (I use WASD to move, and the arrow keys are for actions), combat didn't seem to amount to much than mashing as fast as I could with the occasional block. There were no cooldowns, not much animations, and not much strategy to it. Just mash that attack button so the enemy dies faster. Even when finding grenades, I could just mash grenades out. This came to peak in fighting a Hydra that I mashed grenades at a safe distance to handle.

The Hydra then didn't seem to drop the key to the next area, or I otherwise couldn't see how to progress.

I called it good there.

Maybe I'm wrong, but I didn't want to keep playing to find out. Maybe someone sees something in Tallowmere I can't.

Check out Tallowmere on itch.io
Previous Page
Back to Index
Next Page