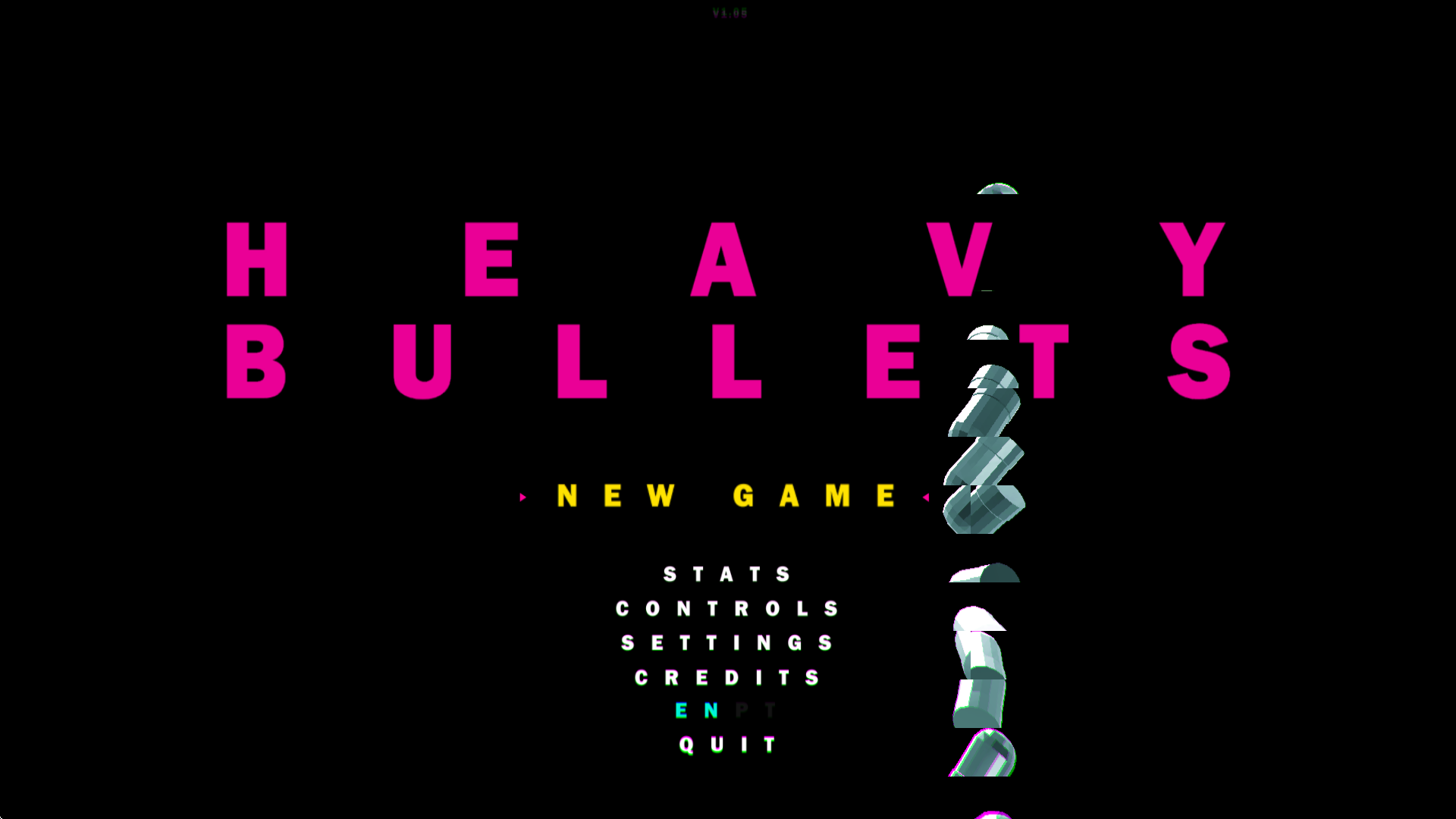 Heavy Bullets is a randomized FPS dungeon crawler, according to the store page. I would just say "FPS Roguelite". The world is randomized, when you die your run's over, but you can bank some supplies for the next one.

I'm generally not a fan of meta-progression like this. It feels very opposite of what permadeath encourages in me. I have the one run, the one try, and I'd prefer them to be isolated experiences, instead of meta-progressing/carryover punishing or boosting me for past decisions.

Metaprogress rambings aside, Heavy Bullets I found truly compelling. You are thrown into a technicolor world of saturated colors, reminding me a bit of placeholder texture things, slightly abstract enemies and a general lo-fi 3D world. I found it thoroughly unsettling the entire time, between the abstractness of my environment and the excellent sound work, retro-esque beeps and boops joined by atmospheric distorted static noises. You are very alone in an unnatural place, and your only friends are vending machines and ATMs.

While a first-person shooter, you only really have the one gun. The primary gimmick to the gun is that your bullets are scarce, but retrievable, along with needing to manually reload your six chambers with button tapping. Collecting and reusing your ammo is a necessity, and adds a paradoxical twist to your usage: of course you can shoot from across the room, but you're going to have to find a way to pick your shot back up. And wildly firing and missing is that much more punishing.

A blend of semi-expected FPS and Roguelite trappings are around too. Secret walls of treasure, a variety of items and power-ups to find, backup weapons and silly interactions like blowing up machines for extra coins. I didn't find the game did a 10/10 job on explaining what things are, though the descriptive sentence is usually enough. Inventory space is pretty limited, which can get pretty frustrating if I want to haul a couple pieces to a bank to pawn them off.

I'm not the greatest at FPS games, and the lack of a map really didn't help with keeping me oriented on where I am, but Heavy Bullets is quickly proving addicting. The real-time action encourages getting better through pure skill, and while I grumble a little bit at carrying over things from past runs, grabbing a few extra coins or a potion I left behind is helping me reach later areas quicker than if I had to purely git gud.

Heavy Bullets is a mixing of two genres I usually don't see combined, and I think it did the task excellently while offering its own unique atmosphere and reason to play. It's definitely staying downloaded, and maybe one of these days I'll even get to the ending of it.

I enjoyed it. Heavy Bullets is a good game.

Check out Heavy Bullets on itch.io
Previous Page
Back to Index
Next Page