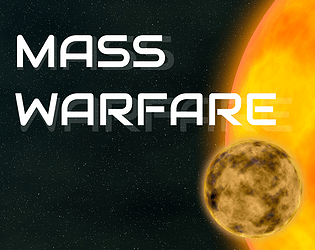 Mass Warfare is a real-time strategy game of sending your ships out to capture planets and defeat the enemy. Actual gameplay is pretty simple: selecting ships and sending them to a location. They'll either capture planets or fight enemy ships (or both). There isn't much in the way of refined or convenient controls, just box-selecting and right clicking, so micromanagement gets very awkward very fast. Ships will also change course by themselves to attack any enemies nearby, which gets a little annoying when I want to capture adjacent planets but my ships decide they'd rather fly away to get blown up instead.

The game does very little for explaining itself, so I'll do a bit of a favor and describe the basics of what to do here: You want to click and drag to select your ships (the little things far on the left), and right click to send them to planets to capture. Planets generate more ships - you can press R to decide what kind of ship they generate, from weak and fast, to strong and slow, to something in the middle. The update log mentions rally points, but I have no idea how to activate those, which would help a lot.

Eventually you'll have a decent sized swarm, possibly with some micro to capture more planets at once, and then you send them out and attack the enemy and capture their planets. At this point in my case things tend to decide themselves over who has more spam than the other person.

It isn't super clear to me "why" I end up losing, although maybe that's me lacking a good sense of strategy. My impression is the map just didn't work out in my favor, because by the time I'm wrapped up in capturing the AI has a gigantic swarm that overwhelms my entire force. I can win against one Easy AI most of the time, though it's hard for me to figure out if I did anything right or wrong to deserve the results, and anything beyond that just seems absurd.

There's the start of something here - and I don't particularly blame it for not having that something more, given its development time - but Mass Warfare would have went from a simple check-out to something with more tooth if there were a few more conveniences added to make getting into it a little easier. As it is, though, I imagine someone with a keener sense of strategy would have a better (or worse? Always hard to tell with these things) time with it.

I enjoyed it, for a time. Mass Warfare is a good game.

Check out Mass Warfare on itch.io
Previous Page
Back to Index
Next Page