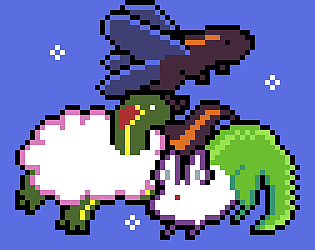 To Be a HerpWitch is more of a kinetic novel than anything, but strictly speaking there *were* interactive moments, just incredibly incredibly minuscule. Consequently, I don't have terribly much to write about here, because the actual story took about five minutes. But, a post is a post.

To Be a HerpWitch stars you, a nonbinary individual aspiring to be a HerpWitch. Unfortunately, you're not eligible because the Professor Oak of this story is actually a terrible person. This is a source of much stress, and also, to be relatively spoiler-free about it, other things happen and then it ends on a cliffhanger.

Visually, I was fond of the art used, although I can understand it might be too sparse on the pixels for some. Storywise, there wasn't too much time to get invested, although I related to some of the feelings and thoughts laid out. The familizards are absolutely adorable, too.

It's a real shame that the story never seems to have been continued in any fashion - by the time the end hit me I was getting excited to see more. Still, it won't take you much time, and as brief as it is it still got my imagination going by the end of it, so I would say it was a few minutes well-spent.

I enjoyed it. To Be a HerpWitch is a good game.

Check out To Be a HerpWitch on itch.io
Previous Page
Back to Index
Next Page