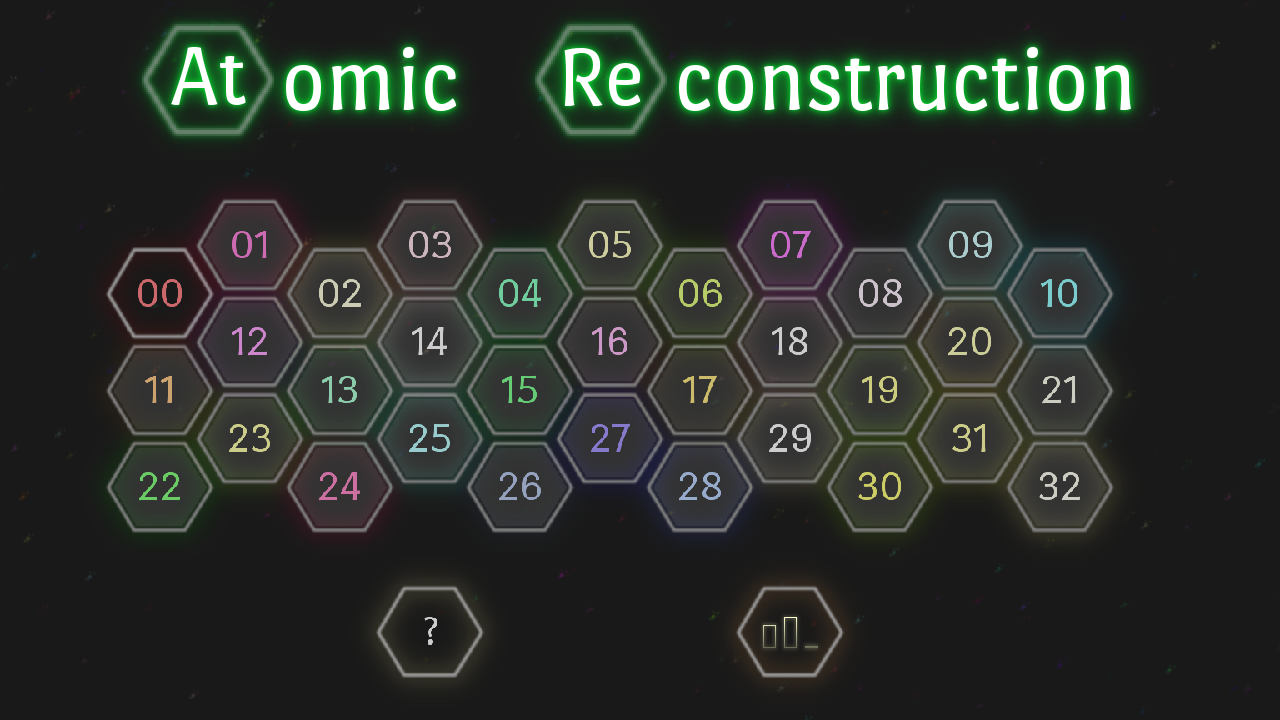 I feel trapped in a sea of puzzle games. Minimalist, atmospheric puzzle games. I expected a fair amount of visual novels in the bundle, but I'm getting a lot more puzzle games than I expected. I don't know how to say this without diminishing the work put into the games, but it must be a relatively straightforward genre to develop? Given puzzlers are, as readers may be know by now, not my cup of tea, it's making the bundle a bit of a slog. I must go out of my way and pick up some action games here and there.

Atomic Reconstruction is a puzzle game about elements. You need to split, pool, and fuse atomic elements together to create the target element. There is physical space to be concerned about, moving around elements to make pathways and ensuring you have sufficient space for the products of fission. Not the most outrageous concept for a puzzle game.

Unfortunately, in practice, I found the game baffling, and not in the way it probably wants to be. The rules of fusion are mildly confusing, and while the game happily shows what an atom will fission into and fuse into, it still feel a bit brute-force. The ability to pool similar atoms together and mash them into a greater fused one wasn't really explained, and once I knew about it, some puzzles got a whole lot easier - it took away a lot of pressure from the physical-space requirement... which never felt "puzzling", just "annoying".

Some of the interface was a little awkward, too - the screen after clearing a puzzle was confusing to me (I believe it's actually a scoreboard), and clicking on non-unlocked puzzles did arbitrary things like adjusting the volume or opening the tutorial again. We're hit again with a puzzle game where clicking and dragging is your only answer, as opposed to clicking at start and destination. If fusion or fission fails, you're not really told why or given much of an error indication - I finally figured out one fission wasn't working because I didn't have enough room... and then shortly after piecing that I needed enough room in the right places for where the atoms will scatter.

Now, for someone who's willing to wrap their head around the periodic table? You got over 30 puzzles to go have a blast with, and even early on these were feeling pretty nasty, so there's some juicy ones to hit your head against. Myself, well, let's be honest - it's a puzzle game, okay? I love the concept, and I'm tryin' here, but it's the genre.

I tried to enjoy it, but, y'know. Someone else would surely enjoy it. I'm sure Atomc Reconstruction is a good game.

Check out Atomic Reconstruction on itch.io
Previous Page
Back to Index
Next Page