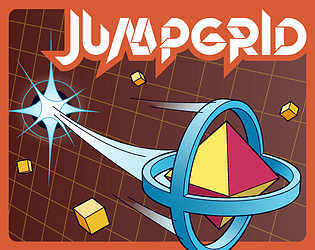 JUMPGRID is just one of those games. You know the sort. They're a bit abstract, they're hyper-stylized, their premise is simple, they're tough, and they can hit that blend of frustrating and fun.

In JUMPGRID, you, well, jump around a grid. The grid wraps, and your movement is instant teleportation. You dodge obstacles to collect collectables to open a portal to the next level. That's it. You, jumping around 100 semi-psychedelic stages with obstacles taking all kinds of - maybe just a little overwhelming - shapes and patterns.

The controls are ultra-tight, failure is maybe a split-second too long to be agreeable but still pretty zippy. There's a speedrun and infinite mode if you're into that, and levels are mercifully short. I found myself doing more rote memorization than feeling clever about maneuvering around things, treating stuff as more of a rhythm game, but that comes with the nature of some of the obstacles, I think. I have to take breaks often enough because the wild moving colors and quick switches to next levels messes with my brain a little, but if you're into things like Super Hexagon, you're going to love getting into the zone with this.

I enjoyed it. JUMPGRID is a good game.

Check out JUMPGRID on itch.io
Previous Page
Back to Index
Next Page