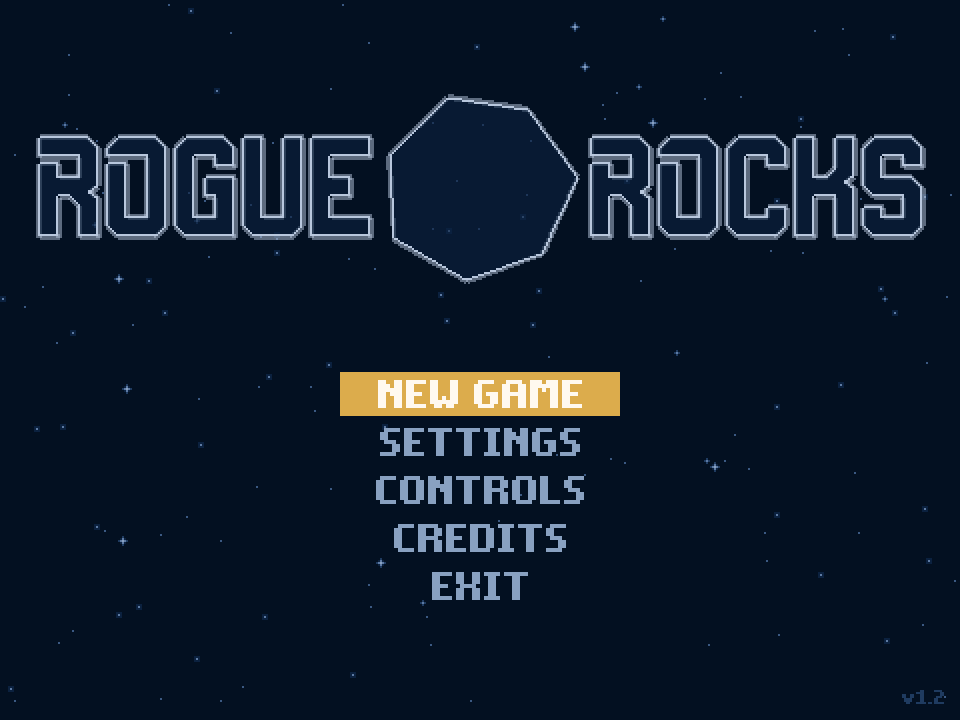 Rogue Rocks is Asteroids, but expanded. That's honestly the easiest way to put it. Choose one of three ship types, explore a very open screen-scrolly field of asteroids, collect powerups, and gather currency to get to the next zone. Repeat until you hit the end and horray, you're a winner.

The game expands on the Asteroids gameplay in what, to me, feels like a very natural evolution. The area maps are quite big, there are different asteroids with different properties to them (I enjoy that to collect powerups you also, indeed, shoot a Power-Up Asteroid until it breaks to collect the powerup). Once in a while you might bump into a small shop to buy one of two upgrades with your currency, and if you don't get to the next area once time runs out bombs start appearing to force you to hurry. The only real danger is the asteroids themselves: there aren't any enemy ships to get shot by, just bumping into asteroids.

It's a pretty fun gameplay loop, really. Shooting at asteroids is simple braindead fun, and dealing with the frictionless movement can easily cause panic when I needed to change course half a second ago. There's a bit of a balance to keep between collecting money to keep progressing on time and spending money when you see upgrade shops, and being able to efficiently fly around farming while exploring is a skill I felt very rewarded for developing. The zones you go through are randomized, so which asteroid gimmick you'll run into next at least varies a bit from run to run.

There is, however, what I consider a major dealbreaker here: There are at least two different sectors where the primary gimmick are that the asteroids are close to invisible. In my case, with my monitor and crappy vision, this made asteroids effectively invisible completely. They still show up on your map okay enough, but these were some serious fun-killers for me, since playing with the map on was hardly any better than squinting to see them. Every other sector was so cool, though, and here are two that just ended up being completely frustrating. Augh!

Outside of that, or if that isn't really a problem for you, Rogue Rocks is some good clean fun. I'd give it a look, and I'd also recommend full screen mode: I ended up moving my mouse out of the window a little too often when trying to aim and shoot.

I enjoyed it. Rogue Rocks is a good game.

Check out Rogue Rocks on itch.io
Previous Page
Back to Index
Next Page